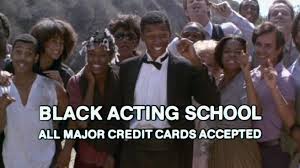 TV Imagery:The Hollywood Shuffle is the first section within the topic of TV Imagery. This issue focuses on the stereotypical roles Black people tend to occupy in media such as news and entertainment such as TV and movies and how it impacts the Black Community.

1.Do you believe the news, entertainment, and social media coverage of the Black community is overly critical in your eyes? Why or why not?

2. Does a black actor/actress choice in a role diminish/uplift them in your eyes yes or no and why?

3. Is the impact and influence of TV imagery over stated in terms of its effect on the Black community?

When we first created Black Advancement Inc. approximately six years ago, many of the groundbreaking and free spirited shows with Black leads and themes did not exist.  Think about that sentences, no less than six years ago there was no Atlanta, Insecure, Luke Cage, Blackish, or Get Out, Black Panther, or Girls Trip  etc.  Only recently have the executives of major studios believed in what We as a people already knew, We are an ingenious people with a wide breath and depth of experiences and stories that, while relatable to all, are uniquely Black.  Be that as it may, media overall continues to focus on all of the negative stereotypes applied to Black people as often as ever.  Turning tragic situations like the murder rate of a predominantly Black city into an indictment of Our humanity and using it to support the policies that helped create such situations in the first place….but I digress.  We are here to talk about the continued negative imagery We are subjected to in the hollywood shuffle and the news cycle and to see if this TV Imagery truly contributes to the destruction of Our community?

Please write in and response to our 3 poll questions or post some questions that you would like to see asked.  These question and more were addressed on 11/01/2020 in our Roundtable which is also available on YouTube.