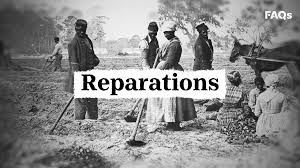 Reparations: Should Blacks Get Them and Do Neo-Whites Deserve to Pay Them

This is the fifth and final section within the topic on Integration.  This discussion will focus on the controversy of reparations and how the fight both for and against them impact the Black Community.

1. Is there a valid reason for not giving reparations to descendants?

2. How should reparations be paid out?

3. What would you do with your reparations?

Seemingly everyone that the United States has ever done wrong has been compensated through land, payment, and other means…except for Black people in America!  An ungodly number of lives and money were tied up in the institution of slavery, with amounts ranging in the billions of dollars amassed through it.  For nearly a century after America became a sovereign nation, slavery could to grow and feaster with death and profit growing right beside it.  It was not until hundreds of thousands of lives lost in a civil war that Black people on mass could even whisper of freedom and the chance to finally oversee their own destiny…almost!!  With no education, property, or anything else to call our own, Black people were set free to nothing.  Adding insult to slavery, the gains proposed and even passed to help eradicate these disadvantages were under-minded with concerted efforts made to torpedo those proposals once again leaving the greater Black population destitute.  A fair argument can and has been made that Black Americans never reached full citizenship until 1964-65, leaving hundreds of years of mistreatment claims for Black people.  Reprisal of course, never took place and it has become more and more of a heated debate as too if, when, how, any reparations will be given to Black Americans.  This issue must be addressed and determined if the idea of reparations will lead to the destruction of Black Community?

Please write in and response to our 3 poll questions or post some questions that you would like to see asked.  These question and more were addressed on 10/15/2022.