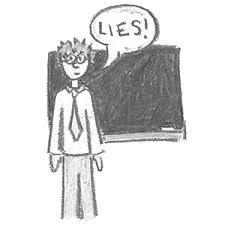 Lies My Teacher Told Me: The Indoctrination of  White Heroism

This is the first section within the topic of the Role of Education.  This discussion will focus on the mistruths, misinformation, and misunderstandings perpetrated in schools all across America and how ignorance and euro-centristic curriculums impact the Black Community.

1. What is the biggest lie perpetuated in American schools and does it impact Black people?

2. Should teachers be given more freedom to craft a curriculum or would you rather there be a universal curriculum for grade school?

3.  Do you believe the American school system is meant to indoctrinate children or to educate them?

It is no secret to any person that pays attention while attending or parenting a child in the American school system that the materials have a pro-privilege bend.  Although this isn’t exclusively reserved for White people, a majority of this “to the winners the spoils go” type of education, Whites come out as the fathers and mothers and leaders of most of the achievements we as a society deem worthy of learning.  The impact of this reinforcing some notion of supremacy is at the very least arguable, if not down right the sole reasoning for the educational system being set up in such a manner.  With this bias view guiding the children of this nation, the question has to be asked to all children of color, but specifically for Black children for our cause, does this type of education contribute to the destruction of the Black Community?

Please write in and response to our 3 poll questions or post some questions that you would like to see asked.  These question and more were addressed on 8/9/2020.

Lies My Teacher Told Me [unedited]

9 thoughts on “Lies My Teacher Told Me”